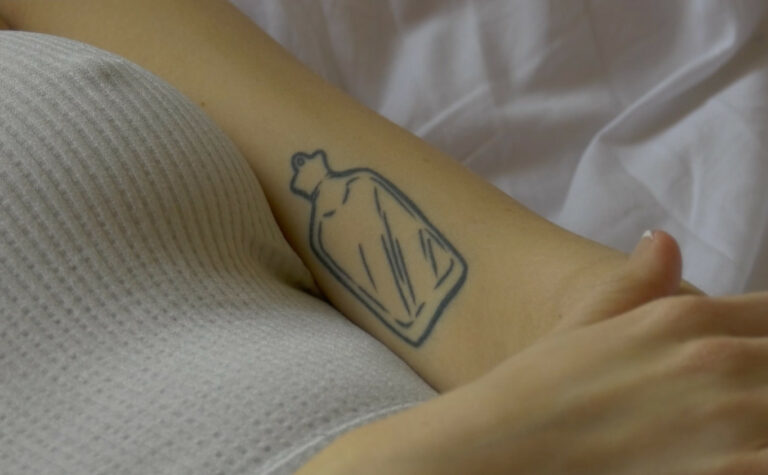 Hope everyone is keeping well.

This newsletter coincides with the launch this week of Francis O’Mahony’s Nettle Bush on ‘aemi online’ as part of our NCAD Showcase 2021. Nettle Bush is an introspective film that draws from interviews carried out with people questioning their gender over lockdown and which invites a closer look at the relationships people have with the objects in their possession and how the meaning of these personal objects radically changes over time.

A second film by Francis O’Mahony, Cat Vomit, features within ‘Acts of Revelation’, aemi‘s curated programme for GAZE International LGBTQ+ Film Festival, screening at The Lighthouse Cinema. The diverse filmmaking styles in ‘Acts of Revelation’ make this a great programme to start off the weekend and a fantastic introduction to international artist film, featuring titles from Brazil, France, Haiti and Canada. As well as Cat Vomit, another programme highlight is Anderson Bardot’s breathtaking The Uninhabitable Ones (2020) starring a gifted pair of dancers rehearsing for a show about black homosexuality. Limited tickets for this programme are available for the 7pm screening at The Lighthouse Cinema Fri 1st Oct, and ‘Acts of Revelation’ is also already available online in RoI on [email protected] (tickets available until Sunday 3 October).

aemi‘s 2020/21 touring programme, ‘Signals & Circuits’ will soon be finishing up its national tour. If you can make it, we would strongly recommend you catch the programme over the next 10 days while it is still installed at The Model, Sligo. Later in the month we are partnering with Garter Lane in Waterford to screen ‘Signals & Circuits’ at 6:30pm on Wed 13 Oct, and finally a theatrical screening at Pálás Cinema, Galway, 6:30pm on Wed 20 Oct will be its last Irish date. Full tour dates are here

As winter approaches, we are planning further artist support information sessions and workshops, if there is an area of artist film activity you would like to see aemi cover in the future, drop us a line at [email protected]aemi.ie

Anderson Bardot's The Uninhabitable Ones (2020) screening in 'Acts of Revelation', aemi's curated programme for GAZE International LGBTQ+ Film Festival, screening at The Lighthouse Cinema and online on [email protected] where tickets are available until 3 Oct

39th EVA International, Limerick – the third and final phase of ‘Little did they know’ curated by Merve Elveren features works by Hannah Quinlan & Rosie Hastings, Jasmina Cibic, Driant Zeneli, Rayna Teneva & Mustafa Emin Büyükcoşkun, Oisín Byrne with Adam Gibbons, amongst others. In addition to a focus on Derry Film and Video Workshop, this phase of EVA includes ‘Sexuality of a Nation: Lionel Soukaz and Liberation Politics’ presenting films by queer activist filmmaker Lionel Soukaz, produced in the context of the sexual liberation movement in 1970s France. In addition to the film presentation, a series of online forums led by Paul Clinton will explore the work’s relevance for intersectional and anti-capitalist queer debates in the present day, until 14 November

66th Cork International Film Festival – aemi will present 3 programmes at the festival, looking forward to announcing the details on 14 October. Save the dates for this year’s in-cinema and online festival 5 – 21 November

IMMA, Dublin – ‘The Narrow Gate of the Here-and-Now, The Anthropocene’, featuring People Enjoy my Company by Frank Sweeney and work by Karrabing Collective, and Edy Fung, until 2022

The Model – Artist Breakfast Club featuring aemi. This is the first ABC session which looks at moving image and experimental film. Co-Directors Alice Butler and Daniel Fitzpatrick will give an introduction to aemi, discuss artist opportunities, and speak about aemi’s curated touring programme ‘Signals & Circuits’ currently showing at The Model’s gallery cinema space until 10th October. This ABC event is free and takes place online 11 am Wednesday 6 October

Arts & Disability Ireland – ‘From Access To Inclusion Workshops’ including Developing Multi-sensory Strategies For Engagement, and Knowbility Website Clinics assessing how accessible your website is to people with disabilities, 11 – 22 October. The 7 live ‘Access To Inclusion Symposium’ sessions are available on-demand until 31 October

While some film titles and directors may be familiar, the collection is also packed with new discoveries. Watching even a small selection of the films available casts an eye back in time – pre-Covid/ pre-recession/ pre-digital – to showcase under represented Irish filmmaking practice by women. F-Rated: Short Films by Irish Women is available to watch free, worldwide