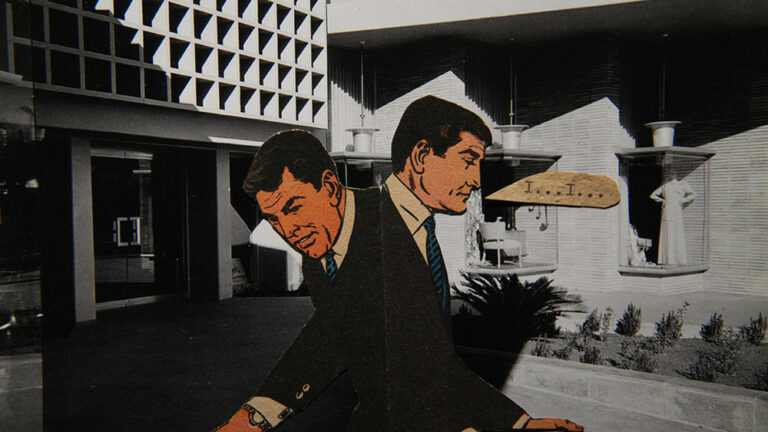 In the vein of Peter Horvath, Winston Smith, or William Burroughs, Lewis Klahr can be considered among the great cut-up/collage artists of his generation. His latest work Sixty Six which premiered at MoMA in 2015 has been celebrated as a “milestone achievement”, the culmination of several decades of productive engagement with what NY Times calls a “cinematic archaeology of the American unconscious”.

aemi (Artists’ & Experimental Moving Image) is a creative platform dedicated to the support and exhibition of artists and experimental moving image.

“Based in Los Angeles, where he teaches film in the theater department at CalArts, Lewis Klahr is one of America’s most prolific avant-garde filmmakers. Drawn to narrative as well as short, lyrical “odes” of purely visual and audio associations, his style might be described as a form of mobile tableaux rather than animation—a term he rejects. Devising a highly original mise-en-scène, Klahr’s images, taken from popular culture sources—e.g., magazines, comic books, catalogues, photos—are cut out and placed against backdrops, then manipulated in various ways, at times inserted and withdrawn, as if they were entering or leaving a “stage”—or, in filmic terms, moving on or off screen—a kind of children’s theater with adult content. He photographs these complex designs frame by frame, conjuring such film conventions as fades, dissolves, superimpositions, long shots, or close-ups through palpable hand manipulations. Sound tracks are critical—whether individual songs, long symphonic pieces, abridged radio or television programs from his teenage years, or a collage of ambient sounds to evoke the atmosphere of a particular place.” – Artforum

“I don’t think of myself as an animator, I really am a collage artist, with all that implies: a need to explore the found materials, to explore history through those materials. It’s got a lot to do with hieroglyphics: this kind of visual shorthand, storing cultural memory. I’m the kind of person who used to go to the Metropolitan Museum of Art, to the Egyptian exhibit, because I was fascinated by the idea of this string of images forming a kind of sentence; I never took the step to find out what they meant, because I didn’t want to know. It’s the same with Hollywood: This image of a woman, this image of a car, this of a gun, you’ve got a noir in three images.” – Lewis Klahr, The Village Voice

Orla Mc Hardy is an artist based between Donegal (IRL) and Richmond, Virginia (USA). Her work spans traditional single channel films made for broadcast to mixed media, site-specific gallery installations. Using interdisciplinary animation processes as a starting point, she has collaborated with poets, radio producers, sound artists, architects, designers, and animators and has crossed over into live-action and documentary filmmaking.