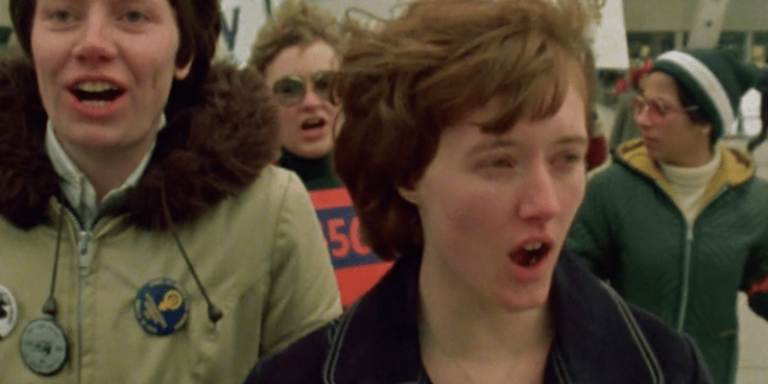 Writer, artist and researcher Rachel O’Reilly will give an introductory talk to a major work of feminist mining cinema, Sophie Bissonette, Martin Duckworth and Joyce Rock’s film Une Histoire de femmes (1980), placing it in the context of current protest movement and their impact on workers rights and the environment.

Writer, artist and researcher Rachel O’Reilly will give an introductory talk to a major work of feminist mine labour cinema, Une Histoire de femmes (1980), in the context of current protest movements working against mining industries, and their impact on workers’ rights and the environment.

As we have recently seen with the debate around Fracking in Ireland, images of ‘mining jobs’ continue to be used to attract social investment for increasingly deregulated, ‘unconventional’ and mega-scaled extractive projects. ‘Unconventional’ mining use technologies quite distinct from modern mining techniques, and consistently inflates employment projections. Nevertheless, it is often an appropriated, decontextualized modernist image of mine labour dignity that gets these projects ‘over the line’.

What was the mine labour image as an image of work, and of social organizing? How can we revisit this image, in order to appreciate its contradictory material politics, and its historical relationship to contemporary forms of production that work away at the very limits of land and water use amidst large scale climate change? Rachel O Reilly approaches these questions within her own practice, attending to contemporary successes of social movement, as well as to radical feminist experiments in labour cinema of past decades, which look at the particular ways capital and surplus value are extracted through the regulatory ideals of contracts.

Sophie Bissonette, Martin Duckworth and Joyce Rock’s film Une Histoire de femmes (1980), stands out as an exemplary work of labour cinema, not only for revaluing women’s own unwaged work as ‘wives’ and leading strike strategists, but also for presenting to later divestment movements the formal contradictions in mining contracts (relating to wages, sex-gender, race, social provenance) that bracket to eliminate eco-social futures.

Rachel O’Reilly (b. Gladstone, Australia, living Berlin) is a writer, artist, independent curator and researcher whose work explores relationships between art and situated cultural practice, media and psychoanalysis, aesthetic philosophy, and political economy. Since 2015, she has been a Seminar Leader and Theory Tutor in the “How to Do Things with Theory” program at the Dutch Art Institute in Arnhem, The Netherlands. From 2013-14, she was in residence at the Jan van Eyck Academie, where she initiated The Gas Imaginary, a ongoing artistic research project which explores the forms and norms of “unconventional extraction” investments in settler colonial space. She has worked as a curator of film, video, and new media at the Gallery of Modern Art, Brisbane, including the Fifth Asia Pacific Triennial of Contemporary Art, and has a Master in Media and Culture from the University of Amsterdam. She recently co-curated Planetary Records: Performing Justice Between Art and Law, Contour Biennale/DAI Public Program, March 11,12, 2017, Mechelen.

During her time in Ireland, Rachel O’Reilly partakes in The Algae Summit, an international conference on an abandoned island in the Shannon Estuary from 13-18 June 2017. This event marks the beginning of The Expanded Field, a new collaborative programme jointly organised by Askeaton Contemporary Arts and Lismore Castle Arts, Waterford. Throughout 2017-8, artist residencies, new commissions and exhibitions will collectively explore the multifaceted nature of the Munster environment, aiming to find new methodologies and approaches for the urgent issues facing the region today.

aemi is a creative platform dedicated to supporting and exhibiting artists’ & experimental moving image. A key objective is to develop audiences for artists’ moving image in Ireland through regular, curated programmes of both Irish and international work with the intention of contributing to and developing critical discourse around a wide range of practices in this area.