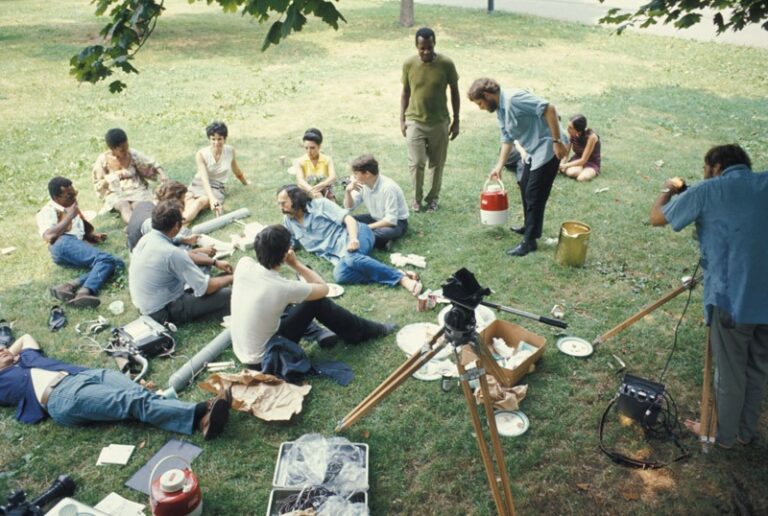 We are delighted to welcome comedian and theatre maker James Moran to introduce this screening.

Symbiopsychotaxiplasm: Take One, conceived as ‘take one’ of a series of ‘takes’, is a one-of-a kind documentary fiction hybrid. Directed by and featuring William Greaves, the film records Greaves as he loosely leads an increasingly perplexed film crew in New York’s Central Park as they try to ascertain what kind of film they’re making. A couple repeatedly enact a break-up for a screen test, a documentary crew films a crew filming the crew, locals wander casually in and out of frame: Greaves’s film defies easy description.

Filmed in 1968, Symbiopsychotaxiplasm was a visionary experiment that remained unknown for decades. Yet this wildly innovative, counter-culture landmark film remains one of the most insightful ever made about filmmaking.

When Symbiopsychotaxiplasm: Take One surfaced in 1991, it was a double surprise. It surprised those who assumed they were familiar with the major independent and experimental films of the sixties, and it surprised those who believed they understood the career of William Greaves; firstly, as a stage and film actor and a drama teacher and, subsequently, as a director and producer of documentary films. Neither of these careers seemed to account for this singular metacinematic experiment. And yet, as fully as any film he has made, his self-described “study of the creative process in action” combines his interest in acting and in actors with his need to document and interpret real events.
The script is acrimonious yet somewhat clichéd, the actors tense and awkward. The crew is unnerved and wrong­footed by the filmmaker, played by William Greaves himself, whose directing style is infuriating, inconclusive, vague and deliberately contradictory. At their wits’ end, they borrow a camera and film themselves debating the shoot in urgent, rambling, evening discussions. The frame splits in two. Sound levels repeatedly stutter and glitch; through it all glides the sound­track of Miles Davis’ In a Silent Way: serene, serious, enigmatic. (The Otolith Group)

Director, producer and writer William Greaves (1926 – 2014) began his career as a featured actor on Broadway and in motion pictures. His work behind the camera has earned him over 70 international film festival awards including an Emmy and four Emmy nominations. In 1980 he was inducted into the Black Filmmakers Hall of Fame, and in the same year he was the recipient of a special homage at the first Black American Independent Film Festival in Paris. In 1986 he received an Indy – the special Life Achievement Award – from the Association of Independent Video and Filmmakers. He was honoured by the National Black Theater and Film Festival with its first award for Lifelong Achievement in Film and for Contributions to Black Theater. A long-time member of The Actors Studio in New York, William Greaves was honoured by the Studio in 1980 as a recipient of its first Dusa award, together with Studio members Robert DeNiro, Jane Fonda, Marlon Brando, Arthur Penn, Sally Field, Al Pacino, Shelley Winters, Dustin Hoffman, Estelle Parsons, and Ellen Burstyn, among others. From 1969 to 1982, he taught acting for film and television for the late Lee Strasberg at the Strasberg Theatre Institute in New York.

Greaves has produced and directed television, documentaries and feature films over the course of his career. For two years he served as executive producer and co-host of the pioneering network television series Black Journal, for which he was awarded an Emmy. Notable and award-winning films by Greaves include Ralph Bunche: An American Odyssey; Ida B. Wells: A Passion For Justice; and From These Roots, an in-depth study of the Harlem Renaissance that became a classic in African American history studies. Greaves also produced, wrote and directed three feature films including Symbiopsychotaxiplasm: Take One; The Marijuana Affair; and Ali, The Fighter, starring Muhammad Ali and Joe Frazier. Retrospectives of William Greaves’s work have been held at the Museum of Modern Art and the Brooklyn Museum in New York. 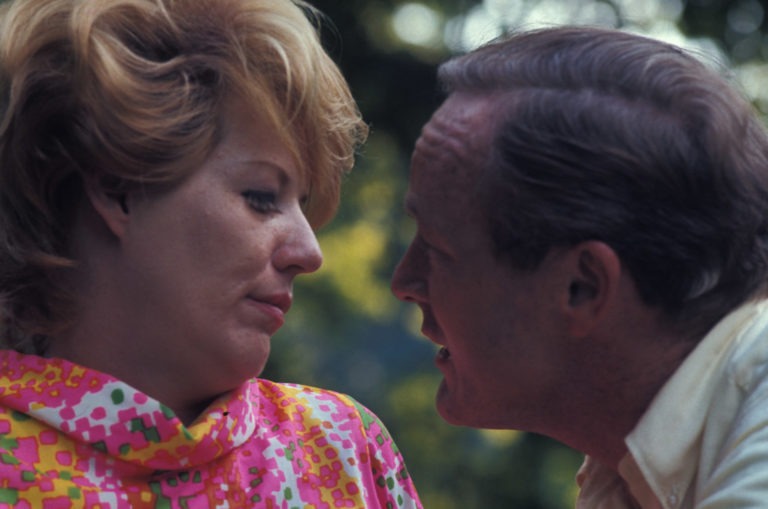 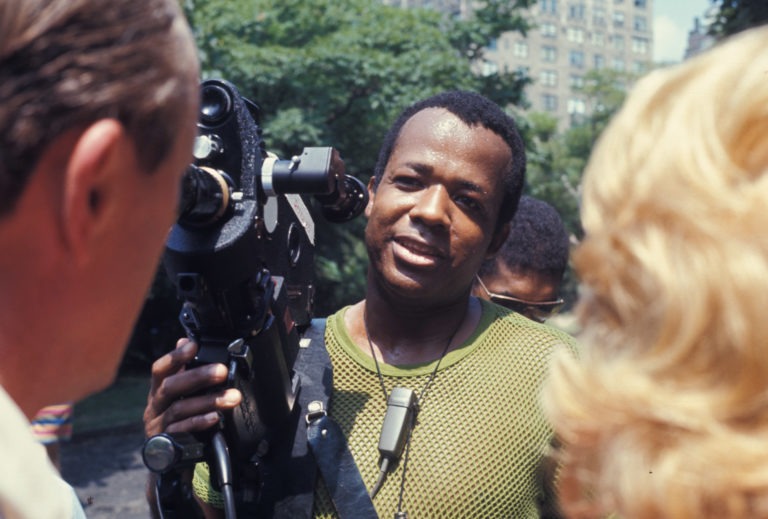 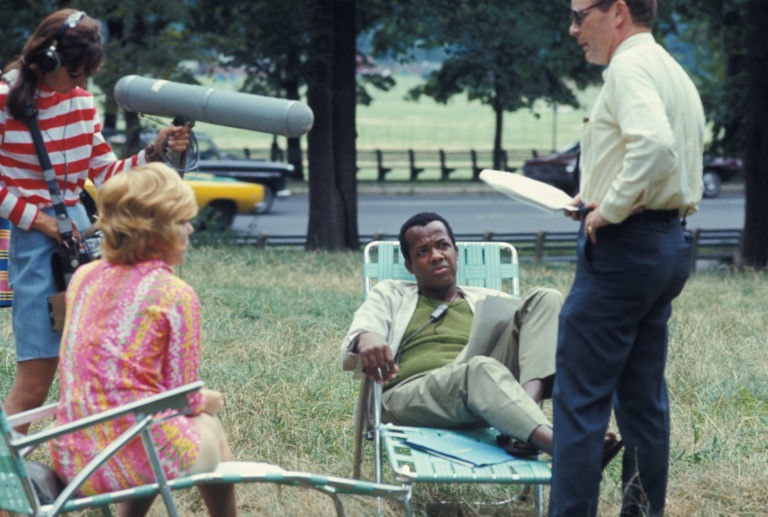 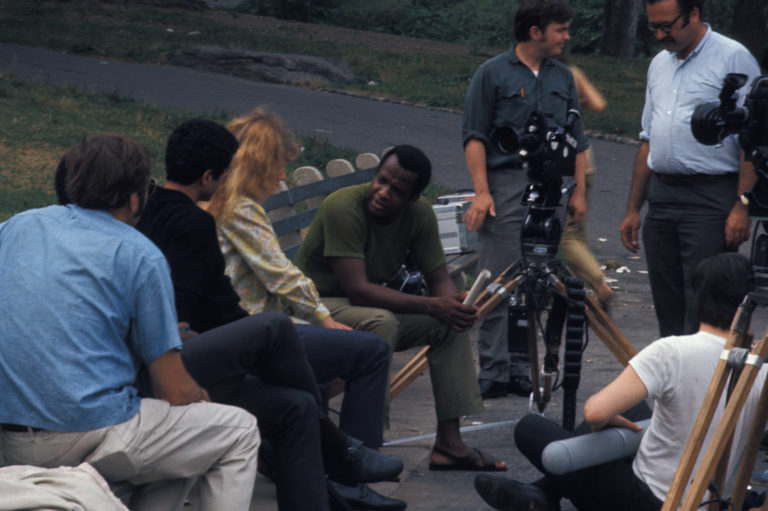 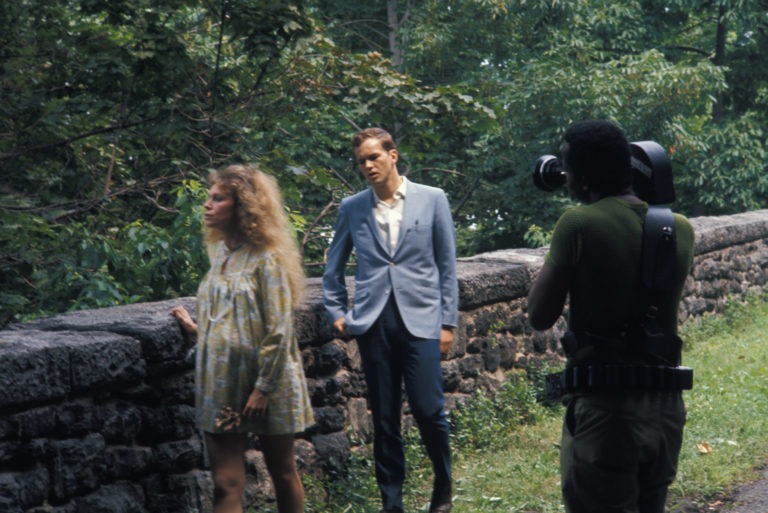