aemi’s second curated Year in Review programme continues to wrestle with the impact and consequences of this particular moment in time while also showcasing some of the best international artist moving image works that have helped sustain us through a period of profound change. The films in both Year in Review programmes evolve thematically; where the first programme largely dealt with a more singular psychological space: pursuits of personal development often pointing to stimulation and isolation survival tactics, Programme 2 suggests some pathways to a future defined by collective forms of participation.

We begin then with Onyeka Igwe’s No Archive Can Restore You effectively interlinking concerns common to the two programmes. Several of the films in this programme speak to the potential of spaces that connect people, considering also the roles of interlinking past and present communities within these spaces, and the future value and affect of culture developing within these environments. Music also continues to play a significant part in this programme, however the emphasis now is on highlighting togetherness through creativity and publicness, and through shared experiences of political resistance, intent and play.

This programme is available in the Republic of Ireland until 18 April on aemi-on-demand, €5 programme rental that stays live for 1 week

A special thank you to LUX, London, and to Video Data Bank at the School of the Art Institute of Chicago vdb.org, supporting partner of this screening 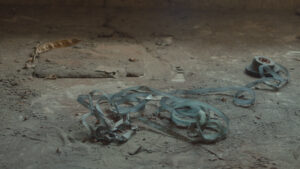 Onyeka Igwe, No Archive Can Restore You
Taking its title from the 2018 Juliette Singh book, No Archive Can Restore You depicts the spatial configuration of the former Nigerian Film Unit building, which lies just out of view, in the heart of the Lagosian cityscape. Despite its invisibility, it contains purulent images that we cannot, will not, or choose not to see. The film imagines ‘lost’ films from the archive in distinctive soundscapes, juxtaposed with images of the abandoned interior and exteriors of the building. This is an exploration into the ‘sonic shadows’ that colonial moving images continue to generate. Commissioned by Tyneside Cinema and produced in association with the KW Production Series, a co-production by Julia Stoschek Collection and Outset Contemporary Art Fund (image and notes courtesy of the artist)

Lynne Sachs with and for Barbara Hammer, A Month of Single Frames
In 1998, filmmaker Barbara Hammer had an artist residency in a shack without running water or electricity. While there, she shot film, recorded sounds and kept a journal.  In 2018, Barbara began her own process of dying by revisiting her personal archive. She gave all of her images, sounds and writing from the residency to filmmaker Lynne Sachs and invited her to make a film with the material.  Through her own filmmaking, Lynne explores Barbara’s experience of solitude. She places text on the screen as a confrontation with a somatic cinema that brings us all together in multiple spaces and times. (image and notes courtesy of the artist and Kino Rebelde) 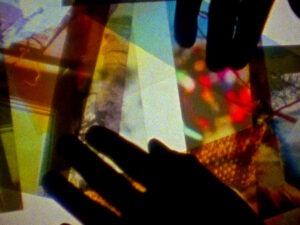 Sky Hopinka, Lore
Images of friends and landscapes are cut, fragmented, and reassembled on an overhead projector as hands guide their shape and construction in this film stemming from Hollis Frampton’s “Nostalgia”.  The voice tells a story about a not too distant past, a not too distant ruin, with traces of nostalgia articulated in terms of lore; knowledge and memory passed down and shared not from wistful loss, but as a pastiche of rumination, reproduction, and creation. (image and notes courtesy of the artist) 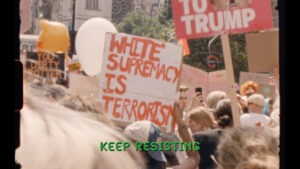 Timothy Smith, Queering di Teknolojik
Queering di Teknolojik is a message from the future. Spoken by the collective digital voice of a group of queer artists and activists, this collaborative project speculates about the possibilities of a temporality yet to come. What does the future look, sound and feel like? Did we manage to dismantle the white supremacist capitalist patriarchy and avert the impending environmental catastrophe? Which strategies of protest and resistance were the most effective? This is a message of hope. Queering di Teknolojik is a collaborative project by Timothy Smith, So Mayer, Teresa Cisneros, Valentino Vecchietti and Campbell X, narrated by their collective digital voice. Script by Timothy Smith & So Mayer, directed & edited by Timothy Smith (image and notes courtesy of the artist) 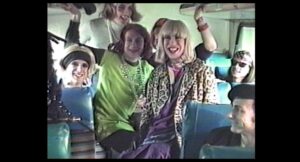 Glenn Belverio, Seize Control of the Taj Mahal
An episode of The Brenda and Glennda Show, hosted by Brenda Sexual and Glennda Orgasm, featuring Buffy Davis, Hedda Lettuce, Wynona Lettuce, and Miss Understood. Brenda and Glennda lead a group of drag queens on a trip to Donald Trump’s Taj Mahal Hotel & Casino in Atlantic City. Intended to be a drag queen gambling getaway and a public stage for drag visibilty, the trip turns into a moment of protest and reflection incited by homophobic discrimination. “If you know any gay gamblers or drag queen gamblers, don’t gamble here, because a dollar for the Trump Taj Mahal is a dollar for homophobia.” Brenda Sexual (Image copyright of the artist, image and notes courtesy of Video Data Bank at School of the Art Institute of Chicago, vdb.org) 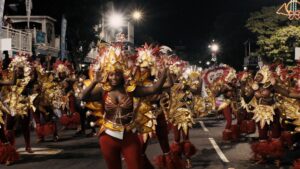 Rhea Storr, Here is the Imagination of the Black Radical
Junkanoo – a carnival-like form of celebration in the Bahamas is a culture with innovative costume designs. Aesthetic and political intertwine as we follow the Shell Saxon Superstars in the year-long production of costumes. Here is Black radical imagination, a resistance, a uniquely Bahamian identity. Who is archiving Junkanoo for future generations? (image and notes courtesy of the artist)

Laure Prouvost, They Parlaient Idéale
They Parlaient Idéale reflects on what it means to be a citizen of a nation, especially when one’s identity is rather ambiguous. A cross-generational and interracial cast of performers embark on a road trip from Grigny, a suburb of Paris, to the French pavilion at the Venice Biennial. Edited in Prouvost’s signature feverish style, she seizes the viewer’s attention by her singular use of wordplay and cheeky political commentary. (image and notes courtesy of Laure Prouvost and LUX, London)