‘We Interrupt This Apocalypse’ is an online screening that uses interruption as an aesthetic device and positions Jesse Jones’ The Spectre and the Sphere (2008) as formal armature through which a wide range of other artists’ work and film extracts are intercut. This composite programme is edited by artist Eavan Aiken.

An opening event will be hosted online through zoom on Tuesday December 15th at 8pm and will feature a discussion between aemi, Isolation TV’s Vaari Claffey, artist Jesse Jones and programme editor Eavan Aiken. This online launch event is free, booking available here

The Spectre and the Sphere by Jesse Jones was commissioned for Project Arts Centre by Tessa Giblin. Theremin by Lydia Kavina and cinematography by Nicolas Villegas.
The Other North by Jesse Jones was co-commissioned for CCA Derry and Artsonje Center Seoul by Sunjung Kim, Aileen Burns and Johan Lundh. Korean gayageum by Kyungso Park. Korean production by Chong Kyu Kilm and Jun Hong Kim 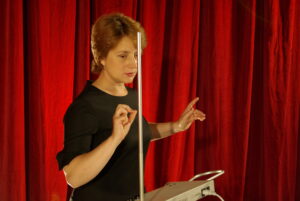 Jesse Jones, The Spectre and The Sphere, 2008, Project Art Centre – image courtesy of the artist

The Spectre and the Sphere, Jesse Jones, 2008, 12 minutes
‘Jesse Jones’ commissioned 16mm film The Spectre and the Sphere evokes the spectres of ideology and amplifies residual voices that haunt the cultural vessels of history. It examines how the spaces of our popular imagining such as the theatre and the cinema are also containers of historical and political impulses. The Spectre and the Sphere conjures up a particular moment in the early twentieth century through the use of cultural artefacts, imagining the various historical potentialities of the time, and how these residues may be present in our construction of the future.
Jones’s adapts the text from Karl Marx’s The Communist Manifesto as its script performer by a whispering choir. Shot in the historic Vooruit theatre in Ghent, Belgium (where the Internationale was composed), the film simultaneously conjures up cultural and political histories as a means of reflecting upon contemporary political imaginings and asks was there another future possible.’
(copy sourced from http://irelandatvenice2017.ie/2016/02/22/the-spectre-and-the-sphere-2008/) 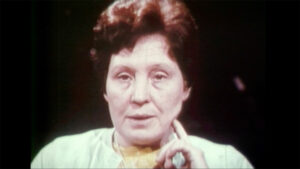 The Steel Shutter, Bill Skinner, 1972, 55 minutes
‘An encounter group session filmed in La Jolla, California, involving a cross-section of people from Northern Ireland who discuss their various perspectives on the Troubles. The group is facilitated by Carl Rogers and Bill and Audrey McGaw. A group of mixed-religion people from Northern Ireland went to America as guests of the Centre for the Study of the Human Person, La Jolla, California, and spoke openly about how the conflict has affected their everyday lives.’
(copy sourced from https://www.tcd.ie/irishfilm/showfilm.php?fid=60531) 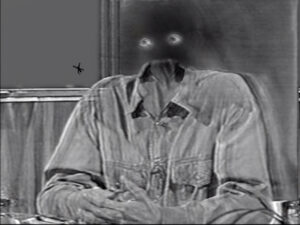 Cancer, Bonnie Camplin, 2004, 4 minutes
‘Bonnie Camplin’s 2004 film, ‘Cancer’, features a biology professor formally presenting “the FACT of cancer”. This “epistemologue” itself becomes matter, cellular tissue; a body corrupted in post-production through video synthesis and chroma-keying; a disruption from within, a cancer of the image, a corruption of fact and a perverse creative proliferation.’
(copy sourced from https://archive.ica.art/sites/default/files/downloads/A_Dying_Artist_guideEWMvkD_0.pdf) 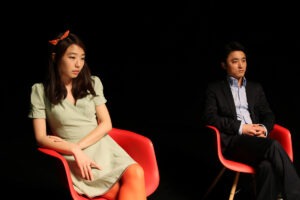 The Other North, Jesse Jones, 2013, 60 minutes
‘The Other North developed from Jesse Jones’ research in 2012 and 2013 in South Korea and the Korean Demilitarised Zone (DMZ), the strip of land that divides the Korean peninsula and acts as a ‘buffer’ between North and South. Jones’ experiences in Korea led to an exploration of archival footage from Northern Ireland dating from the late 1960s to the 1990s. The Other North evolved from research into a film called The Steel Shutter, 1974, which documents a “conflict resolution therapy session” held by American psychologist Carl Rogers in the early 1970s with individuals from various political and socio-economic backgrounds in Northern Ireland. Using transcripts of these therapy sessions as scripts to be performed by actors as verbatim theatre, Jones re-stages the event in Korea, re-enacting the film with eleven Korean actors. The transfer of the historical narrative of Northern Ireland to a Korean context aims to create a Brechtian estrangement; a vacillation between the self and the other. Through its simultaneous presentation of the vernacular and uncanny, The Other North provides an opportunity to consider the effects of cultural, political, and national divisions, and their influence on individuals beyond geographic, political and psychological borders.’
(copy sourced from https://cca-derry-londonderry.org/exhibitions/jesse-jones-the-other-north/) 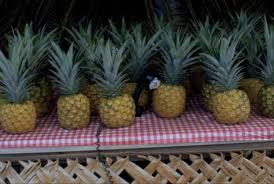 Accent Grave on Ananas, Tamara Henderson, 2013, 3 minutes
‘Henderson’s work emerges from dreams and the movement of their images and experiences into her waking life. In processing these subconscious traces the narratives slip through memories and clichés, desires and trauma. She persistently establishes quotidian objects as near characters before altering them in abrupt or impossible ways: a play of expectation and surprise. The film’s succession of events is carefully planned so it can be edited in camera, captured in single shots as if experiencing the dream. In this Surrealist tradition, everyday objects are manipulated by unseen hands and the sequenced juxtaposition of these moments creates a narrative that is at once absurd and highly familiar. These sequences allude to chain reactions, operations carried out with focused concentration to meditate on the banal and uncanny with equal attention, troubling out their esoteric truths.’
(copy sourced from https://letterboxd.com/film/accent-grave-on-ananas/)

Tap Piece, David Hall, 1971, 3 minutes
‘Conceived and made specifically for broadcast, Tap Piece was one of seven works that were transmitted by Scottish TV during the Edinburgh Festival. The idea of inserting them as interruptions to regular programmes was crucial and a major influence on their content. That they appeared unannounced, with no titles, was essential.. These transmissions were a surprise, a mystery. No explanations, no excuses. Reactions were various. I viewed one piece in an old gents club. The TV was permanently on but the occupants were oblivious to it, reading newspapers or dozing. When the TV began to fill with water newspapers dropped, the dozing stopped. When the piece finished normal activity was resumed. When announcing to shop assistants and engineers in a local TV shop that another was about to appear they welcomed me in. When it finished I was obliged to leave by the back door. I took these as positive reactions.’
(copy by the artist sourced from http://www.luxonline.org.uk/artists/david_hall/tv_interruptions_(7_tv_pieces)_tap_piece.html) 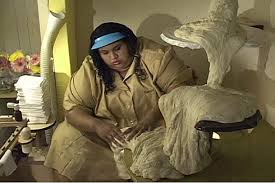 Dough, Mika Rottenberg, 2005-2006, 7 minutes
‘Labor has been the primary theme of Mika Rottenberg’s fantastical video installations. The artist stages and films absurdist assembly lines in which women’s bodies are harnessed toward consumer production. In several works, female bodybuilders and contortionists are shown engaged in mindlessly repetitive physical tasks, providing moisture for scented towelettes with their sweat or making maraschino cherries from their clipped fingernails. Dough (2006) depicts a team of women pulling a rope of dough through a series of claustrophobic factory compartments. At the center of the Rube Goldberg–like system, an obese woman kneads and directs the dough. When a bouquet of flowers is placed before her, a chain reaction is set off: the flowers produce allergic tears, which fall to the floor and generate steam, which in turn causes the dough to rise before it is finally packaged. Equating industrial and bodily processes, the journey of the fleshy dough alludes to digestion, excretion, and birth. Dough evinces the influence of 1970s feminist body art and also recalls Matthew Barney’s elaborate sets and surreal physical processes. Like Barney, Rottenberg gives sculptural form to her videos; here, the projection appears in a cramped wooden room, its outer supports weighed down by doughy sandbags.’
(copy sourced from https://www.guggenheim.org/artwork/17312) 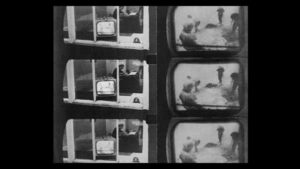 One, Ian Breakwell & Mike Leggett, 1971-2003, 15 minutes
‘Performance. Original 16mm film made in 1971 with Mike Leggett and digitally reconstructed in 2003. An event at Angela Flowers Gallery in which a group of labourers shovelled earth over the course of an ‘8-hour day’. On the 2nd floor of the gallery, each man continously shovelled earth onto the adjacent man’s mound of earth, while at the same time the Apollo astronauts were digging up rock samples on the surface of the moon. While every TV shop window showed live footage of the activities on the moon, Angela Flowers Gallery was transmitting these activities via CCTV to their street-level window. Gradually through the course of the day, as the all-white gallery space was reduced to a sea of mud, the pictures transmitted from each event became almost indistinguishable from each other…Two tourists: “Das ist die Moon[sic].” “Nien[sic], das ist Kunst.”’
(copy sourced from https://lux.org.uk/work/005365-one) 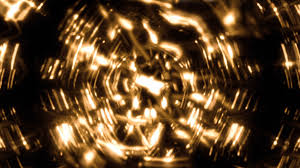 THORAX, Siegfried A. Fruhauf, 2019, 8 minutes
‘Children are told not to look into the sun, to prevent their childish visual urge to discover from being limited by damaged eyesight. In contrast, THORAX fuels adolescent irrationality and curiosity, as a cinematic wormhole leading behind the images, where the sluggish human eye is subject to a play of dazzling light.
(copy sourced from https://iffr.com/en/2020/films/thorax) 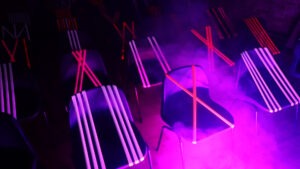 Extract from BOUNCER, Oisin Byrne, forthcoming
‘Footage from a forthcoming film by Byrne, slated to be screened on Isolation TV in early 2021. The film is based on an essay by Byrne on Intimacy and Disgust, originally written in 2013. The chair detail follows on from Byrne’s Depurposed Chairs, 2012, made for the event ‘A Blind Eye’, curated by Vaari Claffey and Isabel Nolan at the Goethe Institut, Dublin.’
(copy sourced from the artist & Vaari Claffey) 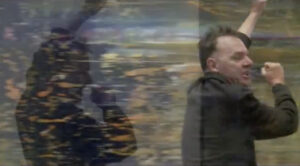 Frank/Francis Wasser on Adrian Searle on Gerhard Richter, Frank Wasser, 2012, 1 minute
‘Frank/Francis Wasser on Adrian Searle on Gerhard Richter is connected to a larger body of student works created by Frank Wasser during his time as a student at NCAD (Dublin, Ireland). Most of the ‘edit-pieces’ were framed by institutional logos as a means to culturally legitimise the content. Over the past ten years these pieces have in turn gone on to be shown in the institutions that they pertained to be endorsed or created by raising questions around how humour and ultimately discourse is co-opted by institutions such as museums and galleries. Frank/Francis Wasser on Adrian Searle on Gerhard Richter (2012) is an edit of Adrian Searle failing to find the words to explain how the painter Gerhard Richter applies paint to his canvas. This particular edit-piece was made as a response to a wider conversation emerging at the time around the use of language to describe artistic processes such as ‘International Art English.’’
(copy sourced from the artist) 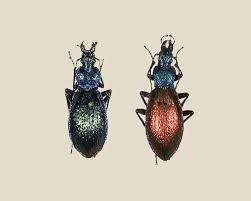 While Darwin Sleeps, Paul Bush, 2004, 5 minutes
‘More than three thousand insects appear in this film each for a single frame. As the colours glow and change across their bodies and wings it is as if the genetic programme of millions of years is taking place in a few minutes. It is a rampant creation that seems to defy the explanations of evolutionists and fundamentalists. It is like a mescalin dream of Charles Darwin’s.
The film is inspired by the insect collection of Walter Linsenmaier in the natural history museum of Luzern. As each insect follows the other, frame by frame, they appear to unfurl their antennae, scuttle along, or flap their wings as if trying to escape the pinions which attach them forever in their display cases. Just for a moment the eye is tricked into believing that these dead creatures still live . . .’
(copy sourced from https://lux.org.uk/work/while-darwin-sleeps) 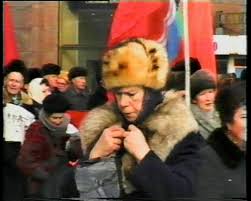 Marmot, Olga Chernysheva, 1999, 2 minutes
Marmot, a poignant and witty 3-minutes video by Chernysheva, shows an old Stalinist woman, tired of protesting, fallen behind a street demonstration, where her colleagues are protesting against capitalism in Russia. Strangely self-absorbed, she is struggling with indecipherable little stuff in her palm (while Stalin’s portrait rests casually under her arm). As the soundtrack, we hear Beethoven’s Marmot played slightly out of tune, diligently and naively, by a child.
(copy sourced from https://artmap.com/catherinebastide/exhibition/olga-chernysheva-2007) 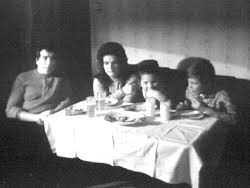