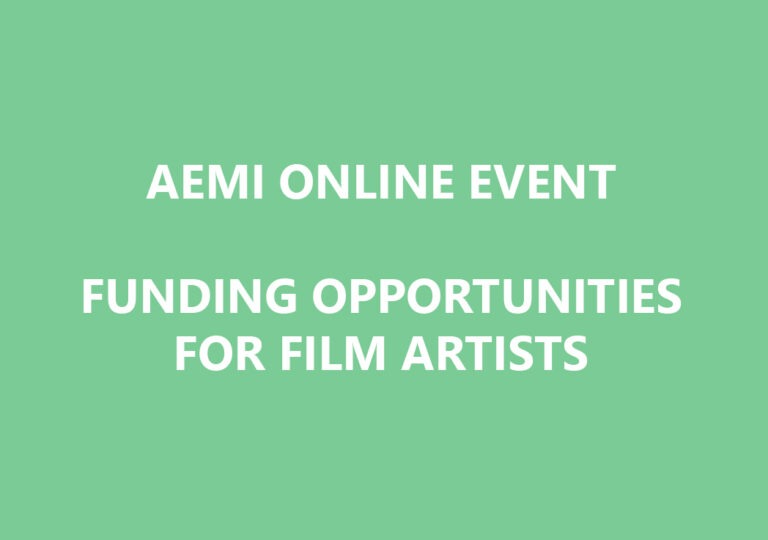 While we would typically take this opportunity to draw your attention to upcoming events, festivals and programmes, this month we wanted to take a bit of time to highlight our work as a resource organisation focused on supporting film artists.

On April 16th we will be hosting a day-long event on funding opportunities and approaches to funding for film artists. This is the most comprehensive funding information event we have done to date and it is an event that is free to attend and open to all. Over the course of the day through a series of distinct workshops we will hear from the Arts Council, outlining funding opportunities for film artists, as well as from artists themselves. We will look at various topics including application writing, funding for first-time applicants, and festival and exhibition strategies. We would hope that this online event will be useful to anyone considering applying for funding.

In addition to this it is also worth mentioning that aemi offers a number of other ongoing supports to artists. We regularly do one-on-one artist support sessions which are accessible remotely and are open to artists at various stages of practice. Through these sessions with artists we can look at anything from funding opportunities to exhibition strategies. In addition to these, our next Rough Cut session also takes place this week. Rough Cut offers artists the opportunity to receive feedback on works at various stages of completion. Generally we invite an industry professional, alongside a small group of peers, to respond to artists’ work and offer guidance. This upcoming event will be led by Mark Williams Director of CIRCUIT, a New Zealand based artist film organisation similar to our own. If you are interested in these or any of our artist resources, feel free to get in touch at info@aemi.ie

We should also mention other organisations currently offering useful supports to artists, in particular Fire Station Artists Studios who now offer a number of practical skills-based training programmes, most of which are now available online. These include a training course for Da Vinci Resolve (useful and accessible editing and colour correction software). Generally we are always looking for ways to make sure artists working in film are receiving the best support possible, technical and otherwise, and if there are other gaps you would like to see filled get in touch and let us know.

The weather is improving, the outlook is improving, and we hope to start thinking about a horizon that includes in-person events in the not too distant future. In the meantime, check out our most recent curated programme, available through our On-Demand platform. We are really proud of this programme, which features some of the best international works we’ve encountered over the past couple of years. It’s also a deeply energizing and motivating programme, featuring artists like Laure Prouvost, Rhea Storr, Sky Hopinka and Lynne Sachs and an episode of The Glennda and Brenda Show by Glenn Belverio. We can’t wait to have an opportunity to discuss the programme with the filmmakers on April 8th and hope many of you will join us for that.

See below for other upcoming events and opportunities including our InFocus pick for April. As always, you can find us on Twitter and Instagram for regular updates.

Catalyst Arts – As the awardee of Catalyst Arts Graduate Award Show 2020, Retreat to Stone, Stone in Retreat, a new film work by artist Nollaig Molloy screens online until Thursday 15 April. As part of the award, an online Artist Talk with Nollaig Molloy takes place this Wednesday 31 March at 6.30pm – tickets are available on Eventbrite

CCA Derry-Londonderry – Urgenices, group online exhibition selected by artist Locky Morris and CCA Director Catherine Hemelryk, featuring moving image works by Bryony Dunne and Michael Hanna, exhibition runs until 22 May
Also check out CCA’s public programme nothing (but windows) by Janie Doherty and Locky Morris, in the windows of the gallery until 24 April and on Instagram

WET Film – Savas Boyraz, Meanwhile (2013), an experimental film silently following a group of guerrillas in the mountains of Kurdistan for a day, screening accompanied by a conversation between the filmmaker Savaz Boyraz with WET member Erika Roux until 31 March, new film every month

Vdrome – Emilia Tapprest, Sonzai Zone (2019), with interview between the filmmaker and Felice Moramarco, until 31 March

Essay Film Festival – all the films will be free and open to anyone in the UK, featuring films by Madeleine Hunt-Ehrlich, Cauleen Smith and Kevin Jerome Everson amongst others, events can be access worldwide including Session 10: Jenny Brady: ‘A-Weighted Response’ Friday 2 April at 7pm

e-flux Film and Video – Zheng Yuan, Dream Delivery (2018), as part of ‘Crashing into the Future’, a programme of films and interviews convened by Cao Fei, until 4 April

Film and Video Umbrella – Kyla Harris and Lou Macnamara, It’s Personal (2021) and available to watch with audio description; Marianna Simnett, The Bird Game (2019) and Confessions of a Crow (2021)

Prismatic Ground – a new film festival centered on experimental documentary founded by Inney Prakash, in addition to other live engagements on 10 April the inaugural Ground Glass Award for outstanding contribution in the field of experimental media will be presented to Lynne Sachs who features in aemi’s Year in Review programme

Children’s Film Encyclopedia – Margaret Salmon, The Enemies of the Rose (2010) is featured on a new website introducing kids to artists’ film. The project, riffing on the concept of the encyclopedia, presents periodic ‘screenings’ alongside educational content and simple activities 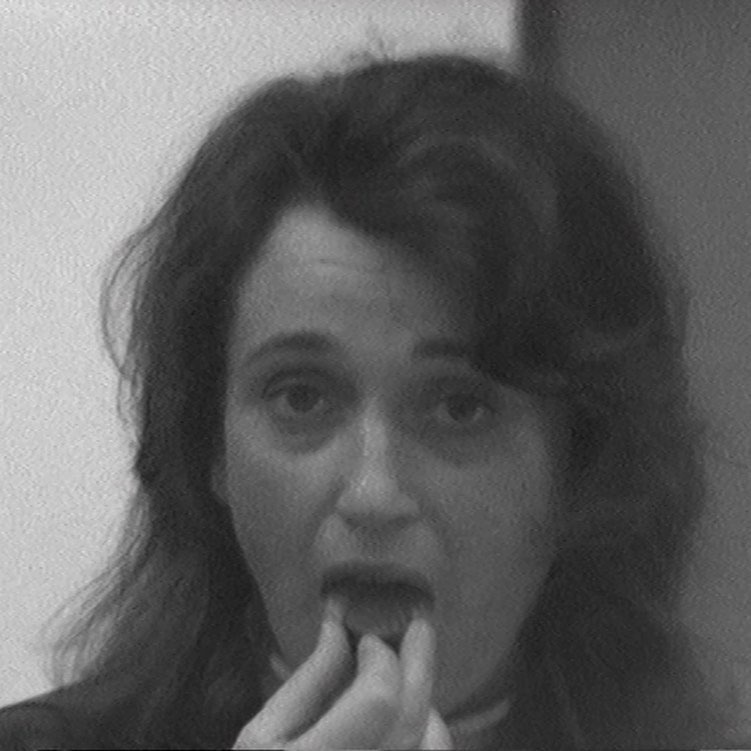 IN FOCUS
Another Gaze Journal: Another Screen presents ‘Eating/The Other’
From Friday 2 April

Recently Another Gaze Journal announced the second part of their next ‘Another Screen’ programme: ‘Eating/The Other’. Six films on eating, ritual and national mythologies, by filmmakers including Valie Export, Patty Chang, Gloria Camiruaga and Ateyyat El Abnoudy.

The programme takes its cue from the the roundtable that follows ‘Hands Tied’ & ends on a discussion about women & eating; desire vs compulsion. The filmmakers of ‘Eating/The Other’ use food to explore ritual, modernity, national mythologies & censorship.

The programme screens from Friday 2 April at another-screen.com with subtitles in French, Spanish, Portuguese, Indonesian, Italian, Japanese and Korean